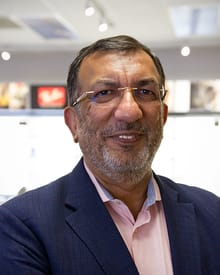 Dr. Nasser was born and raised in Tanzania, East Africa. He had his early education in East Africa. Dr. Nasser moved to Houston, Texas in 1976 to pursue an education in Optometry. He graduated from the University of Houston with a Doctor of Optometry in 1982 and is a Therapeutic Optometrist as well as an Optometric Glaucoma Specialist.

He began practicing in the West University area near the Texas Medical Center and then moved his practice to the Willowbrook area in April of 1984. He established Family Eye Center in July of 1988 and has since opened two additional practices located in the Deerbrook and Greenway/Galleria Area.

Dr. Nasser is a member of the Texas Optometric Association and the American Optometric Association, and an Honorary Committee Member of Prevent Blindness Texas. He has served as the administrator of Vision Source for the Houston Metropolitan Area and is on the Optometric Advisory Board for Zeiss Ophthalmic USA. Because of his diverse background, he speaks five languages other than English: Swahili, Urdu, Hindi, Karachi, and Gujarati.

He is very active volunteering within the community dealing with secular education and healthcare. An organization dear to his heart is Optometry Giving Sight to which he is a National Board Member and Honorary Chairman for the Texas to Tanzania project. In 2010, his leadership and vision took the Texas to Tanzania project to new heights, and funds were raised by doctors, patients and staff, culminating in the construction of the Bariadi Clinic in Tanzania just miles from where Dr. Nasser was born. This mobile clinic, to be renamed Lake Zone "Roshanali Nasser" Outreach Clinic in September 2018, helps thousands of people receive much-needed eye care. Dr. Moes Nasser has been listed in various articles regarding his work in Tanzania since 2008.

His love of giving back to the community is surpassed only by his love for his family. He is married to his beautiful wife Anar and has two daughters – Faria and Sarah. Faria did her undergraduate at Columbia University, received her MBA from Rice University, and now works for Teach for America as Managing Director. Sarah received her undergraduate at Tufts University in Boston, attended Columbia Law School and now works for Proskauer as an attorney.

The well-being and safety of our patients are and always have been our highest priority.

Governor Abbott’s executive order is ending the statewide COVID restrictions and mask mandates, but Vision Centers of Houston will continue to require face masks and practice social distancing while in our clinic. As a healthcare entity, we must follow the guidelines set forth by the CDC.

We are asking you to continue masking. We know that it works. It protects our doctor, staff, and YOU. There are infectious variants are circulating in Texas, and many more people wait to be vaccinated.

Let’s do everything we can to protect each other.

We truly appreciate everyone’s patience and understanding in our desire to protect our at-risk patient population.

We will look to the CDC and their recommendations as we move forward.

COVID-19 Mask Mandate: Our offices will continue requiring our patients and teams to abide by the mask mandate.
For additional details regarding this policy, please refer to our policy update below.